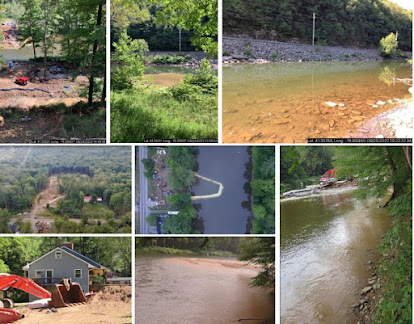 The Department of Environmental Protection Oil & Gas Program and Fish and Boat Commission are investigating the failure of erosion controls to protect water quality at the Pennsylvania General Energy (PGE) Loyalsock/Shawnee natural gas pipeline and a surface water withdrawal construction site on the Loyalsock Creek in Lycoming County, according to Friends of the ‘Sock.

The construction site is on both sides of Route 87 and the Loyalsock Creek, approximately 8 miles north of Montoursville.

On September 5 (Labor Day), a rainstorm caused the wash out of erosion and sedimentation controls and a very heavy sediment plume in Loyalsock Creek for several miles downstream of the construction site that was reported to DEP by Friends of the ‘Sock.

“Effective erosion and sediment controls are critical to protecting the water quality in the Loyalsock. PGE’s failure is a violation of the state’s Clean Streams Law,” said Barb Jarmoska, spokesperson for the Friends of the ‘Sock.  “Without those controls working, a world-class fishery and critical recreational resource for the entire region is severely threatened.”

“Friends of the ‘Sock are monitoring the entire PGE project for compliance with strict environmental protection requirements,” said Jarmoska.  “The project is not only being built through a sensitive watershed in the middle of our community, construction is happening within feet of some of our homes.”

“We want to thank both DEP and the Fish and Boat Commission for their quick response to this significant pollution incident,” said Jarmoska.

The Loyalsock is classified by DEP as an Exceptional Value stream whose water quality must be protected by law, with no degradation.  The Creek was also named by the Department of Conservation and Natural Resources as the 2018 Pennsylvania River of the Year and called a “timeless treasure.”

The Loyalsock Creek is home to the Eastern Hellbender, named the state’s official amphibian after a campaign by the Chesapeake Bay Foundation PA Student Leadership Council.  It only thrives in clean water.  Read more here.

On September 12, spokesperson Megan Lehman from DEP’s Northcentral Regional Office said DEP’s Oil and Gas Program staff became concerned about the site when a routine inspection on August 24 found significant problems with erosion and sedimentation controls and muddy discharges of sediment into the Loyalsock Creek the company failed to report to the agency.

“During this inspection, DEP personnel observed multiple violations of the Clean Streams Law at the site, including an unacceptable discharge of sediment into the Loyalsock Creek,” said Lehman.

“DEP has conducted multiple additional onsite inspections and has been engaged in ongoing discussions with the permittee regarding steps to address the issues at the site and with the Pennsylvania Fish and Boat Commission, which is also investigating,” said Lehman.  “DEP has also received complaints from the public regarding the issues at the site.  DEP will continue to follow up as appropriate.”

DEP inspection reports document site inspections on nine separate days between August 24 and September 9 to follow up on continuing problems with the erosion controls that resulted in repeated discharges of sediment-laden water from the site into Loyalsock Creek.

They include lists of violations, actions taken by the permittee, photos from the site and the DEP inspector’s notes.

“Any member of the public concerned about this or other potential environmental issues they may observe at any time should contact their regional DEP office to file a complaint,” said Lehman.  “Complaints may be filed over the phone or through a web form.

“DEP investigates all complaints and will keep complainant identities confidential.”

Captain Anthony Quarrancino, from the Fish and Boat Commission Central Law Enforcement Office in Bellefonte, said, “We're very aware of the incident that occurred. We had a waterways conservation officer that responded to it after the fact, after [we were] notified about it and we're currently investigating it.”

Captain Quarrancino explained, “When we have a responsible party, we have to figure out what went wrong, what happened.  Was something not maintained properly? All these kinds of things that will be factored in when they're looking into it. But again, that's where we're at right now. It's just under investigation to find out exactly what went wrong to cause that incident.”

The Fish and Boat Commission Regional Office Law Enforcement in Bellefonte can be contacted by calling 814-359-5250.

The Loyalsock is classified by DEP as an Exceptional Value stream whose water quality must be protected by law, with no degradation.  The Creek was also named by the Department of Conservation and Natural Resources as the 2018 Pennsylvania River of the Year and called a “timeless treasure.”

Pennsylvania General Energy just started construction of a high-pressure natural gas gathering line that will cross under the Loyalsock Creek and connect two parcels of State Forest land the company leased from DCNR to develop up to 80 additional shale gas wells in the Loyalsock Valley region.  Read more here.

The project involves the construction of a total of 2.5 miles of natural gas gathering pipelines up steep slopes on both sides of the Loyalsock Creek and the aboveground placement of freshwater pipelines up those same slopes.

PGE’s site prep work on the banks of the Loyalsock Creek includes clear-cutting trees from a work area along Route 87 in Gamble Township and the construction of a coffer dam in the Creek.

Like most oil and gas industry pipeline projects and drilling/fracking operations, the Pennsylvania General Energy (PGE) Loyalsock/Shawnee project has crews from out-of-state working on the project-- in this case from Texas.

They may not be as familiar with Pennsylvania’s environmental regulations and requirements, know local stream conditions, the impacts of rainfall on steeper terrain or construction methods that would avoid serious erosion and sedimentation problems causing discharges into the Loyalsock.

The mission of Friends of the ‘Sock is to protect the Loyalsock Creek and Valley and promote environmentally sustainable alternatives to shale gas and other development.

For more information on this project, visit the Keep It Wild PA website.

(Photos: Top-- three DEP inspection report photos show the extent of the erosion and sedimentation problems starting with the August 24 inspection; Following photos from Friends of the 'Sock-- Middle- Pipeline crossing constructions begins with clearing work area; coffer dam to allow dewatering of half of Loyalsock Creek crossing;  Bottom- construction occurring very close to homes; coffer dam severely damaged by flood water from a rain event on September 5, 2022 that resulted in the failure of erosion and sedimentation controls and a sediment pollution plume for a mile downstream; Right- mud plume continues on September 10)

-- House Environmental Committee To Hold Sept. 20 ‘Wellhead To Stovetop’ Hearing On Natural Gas In PA; Will They Mention $70 Million In Pipeline Penalties Assessed So Far?  [PaEN]

-- Natural Gas, Hazardous Liquids Pipelines Are NOT Required To Carry Insurance Or Show They Can Pay For Damages If They Explode, Leak Or Kill Someone  [PaEN]