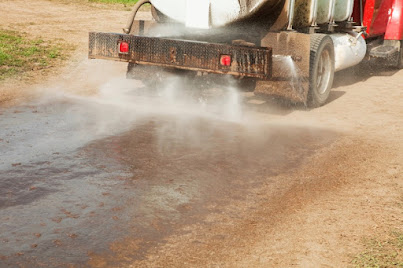 A new study released November 2 by authors from the University of Pittsburgh and Duquesne University shows constant exposure of residents living next to and using roads spread with conventional oil and gas drilling wastewater results in higher levels of exposure to radiation in the wastewater when the appropriate exposure scenarios are used.

The study-- Oil And Gas Wastewater As Road Treatment: Radioactive Material Exposure Implications At The Residential Lot And Block Scale by Dr. Daniel Bain of the University of Pittsburgh’s Department of Geology And Environmental Science, Dr. John F. Stolz of Duquesne University’s Bayer School of Natural and Environmental Sciences, and other authors-- analyzed samples of AquaSalina, a commercial dust suppressant and deicer product made from oil and gas drilling wastewater from the Appalachian Basin and produced in Ohio.

[Note: In October, the Ohio Department of Transportation announced it is no longer going to purchase AquaSalina due, in part, to concerns about high levels of radioactivity and other contaminants in the product.  Read more here.]

“Current decision making is based on risk exposure scenarios developed by regulatory agencies based on recreational users in rural areas and exposures to drivers during a typical commute.

“These scenarios are not appropriate for evaluating exposures to residential deicer users or people living near treated streets.”

The road “spreading” of oil and gas wastewater on dirt roads typically involves a vac truck making three or more passes on each section of road using a combination of an open value on the back of the truck and then a blanket pass with a homemade spreader bar that offers no control on the amount of wastewater spread. See Photos Here.   Read more here.

This can be done multiple times from March through November for dust suppression, and again during the winter when the roads are frozen.

“If the maximum range of near-road soil radium concentrations observed in the region [by DEP] is used in this residential scenario (60 pCi/g 226Ra, 50 pCi/g 228Ra), residents living near these roads would be exposed to an estimated 296 mrems/year, above regulatory exposure thresholds used in nuclear facility siting assessments [100 mrems/year].”

The new study noted the results from a 2016 Department of Environmental Protection study of naturally occurring radiation [NORM] in oil and gas wastewater that is often quoted offered limited results because it assumed only "recreational" exposure to radiation from the wastewater, not the more realistic constant exposure from residents living along a dirt road or rural road that is repeatedly subjected to wastewater “spreading.”  Read more here.

In DEP’s study, “recreational” exposure meant two hours per day, three days per week all outdoors.  No constant indoor or other exposures were included, according to this new study.

“The accumulation of Ra [radium] near O&G brine road treatments can be substantial,” according to the Department of Environmental Protection’s 2016 study.

“This accumulation would be much faster than in residential situations as storm water outfalls receive flow and associated NORM from many meters of roadway.

treatment plant, any leaks in these lines or areas with storm sewer systems would introduce NORM to local systems.

regulations would face the additional challenge of mitigating Ra accumulations near stormwater outfalls or in engineered retention systems.

“The potential distribution of NORM to waters downstream of stormwater infrastructure following road treatment has the potential to make stormwater management more complicated and expensive.”

“These results underline the urgent need to clarify exposure risks from the use of oil and gas brines as a road treatment, particularly given the existing disparities in the distribution of road impacts across socioeconomic status.”

“The concept of risk assumes that individuals can make choices to adjust their exposure. It is not clear this is the case for a resident that purchases a property with historical O&G brine deicer use or lives next to a neighbor who uses a brine product. What is even less clear is the ability of residents living near major transportation routes to control their risk.”

“The reuse of wastewater from conventional O&G extraction as a road and residential deicing treatment has the potential to distribute NORM broadly across sometimes densely populated areas.

“This redistribution likely increases exposures for substantial and unexpecting portions of the public.

“The actual exposure, while low on an individual deicer application basis, has the potential to accumulate and create higher exposure levels through time.

-- Trout Unlimited: What Do Pennsylvania's Dirt And Gravel Roads Have To Do With Trout?

-- Conventional Oil & Gas Drilling Advisory Council Critical Of DEP For Working With Penn State On Independent Studies Of Road Dumping Drilling Wastewater They Had Been Aware Of Since August, 2020

-- Op-Ed: Why Is the General Assembly About To Hurt Us By Authorizing Road Dumping Of Oil & Gas Wastewater?

-- Op-Ed: Will Our Dirt Roads Again Be Used As Dumping Sites For Oil & Gas Well Wastewater