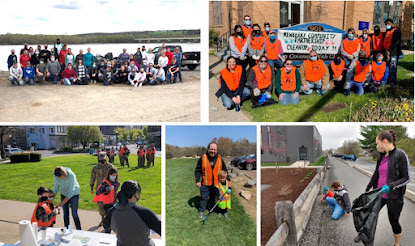 Over the course of the week of April 18 – 25, six river towns organized events that attracted hundreds of volunteers and collectively removed thousands of pounds of trash from area parks, trails, and communities along the Susquehanna River.

“For the past few years, the Susquehanna Greenway Partnership has coordinated Earth Week cleanup efforts in the SGP River Town of Williamsport,” explains SGP Executive Director Corey Ellison. “This year, we really wanted to see this event expand to other river towns as a united effort to beautify the region and cleanup the Susquehanna Greenway. We are thrilled with the response and commend our partners, River Town Teams, and the many volunteers on a job well done.”

For the 2021 River Town Cleanup Week, the Susquehanna Greenway Partnership (SGP) helped to organize efforts by convening the interested parties, assisting with planning, and securing no-cost cleanup materials such as bags, gloves, and safety vests.

These supplies were acquired through the Keep Pennsylvania Beautiful initiative, which offers registered events free resources provided by support from the Department of Environmental Protection, PennDOT, and Keep America Beautiful.

In Williamsport, SGP staff and board members were joined by 34 area volunteers, including a group from the West Branch Valley Association of Realtors, to clear the Williamsport River Walk of 577 pounds of trash in just over an hour and a half.

Throughout the event, volunteers collected items such as discarded blankets, abandoned camping tents, several t-shirts, a child’s sandbox, a shopping cart, and even the broken bow of a canoe, among the typical bottles, wrappers, and cans.

Also in Williamsport, the Newberry Community Partnership led 35 volunteers on a cleanup in the Newberry neighborhood, collecting 225 pounds of trash and 70 pounds of recyclables.

In Lewisburg, the Lewisburg River Town Team & Lewisburg Neighborhoods cleaned up areas in their downtown district and along the Buffalo Valley Rail Trail attracting 90 volunteers who collected 45 bags of trash in total.

On Earth Day, the group also planted 26 trees near the Lewisburg AYSO soccer fields, adding to their overall planting of 114 trees this spring!

In Bloomsburg, Art of PA arranged for an Earth Day Community Drum Circle where participants would be invited to join in on a musical community gathering in celebration of the day.

The event was postponed to May 4, however, a craft session for homemade drums was held at the Bloomsburg Children’s Museum in anticipation of making this experience a COVID-friendly event.

In Lock Haven, Downtown Lock Haven, Inc. gathered a team of 43 volunteers to remove 200 pounds of trash from Triangle Park and the city’s downtown business district. Volunteers included the Lock Haven University ROTC Bald Eagle Battalion, two local Boy Scout Troops and their families, and individuals from the community just stepping up to do their part in keeping the city beautiful.

As designated River Towns, each community has made a commitment to celebrate and connect to the resources of the Susquehanna River and Susquehanna Greenway.

Hosting events such as the ones within the cleanup serve to uphold this pledge and promote a better quality of life for people living in and visiting the area.

The Susquehanna Greenway Partnership could not be prouder of this network of River Towns and would like to thank the partnering organizations and dedicated volunteers who helped make this initiative a success!

The Susquehanna Greenway is a corridor of connected trails, parks, river access points, and communities, linking people to the natural and cultural treasures of the Susquehanna River.

The mission of the Susquehanna Greenway Partnership is to continue to grow the Greenway by building connections along the Susquehanna River, inspiring people to engage with the outdoors, and transforming communities into places where people want to live, work, and explore.