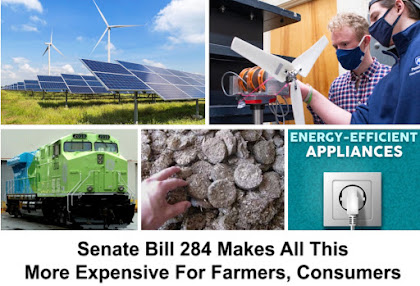 The Senate Environmental Resources and Energy and Agriculture and Rural Affairs Committees will hold a joint hearing May 12 on Senate Bill 284 (Yaw-R-Lycoming) which imposes new bonding requirements on solar electric generation, biomass, coal waste and other renewable energy projects of any type included in the state’s Alternative Energy Portfolio Standards, plus other products and services.

Also covered by the new bonding requirement are--

-- Alternative Energy R&D Facilities: “A facility used for the research and development of technology to provide alternative energy sources or alternative fuels”

-- Transportation Systems For Alternative Fuels & High-Efficiency Locomotives: “A project for the development or enhancement of rail transportation systems that deliver alternative fuels or high-efficiency locomotives.”

[Yes, read the bill.  It really does cover all this stuff.]

“While wind and solar may use renewable energy sources to generate electricity, the components they utilize to do so are not. Often, they include rare earth metals and other hazardous materials which pose environmental or public health hazard if not handled appropriately,” Sen. Yaw said in his co-sponsor memo.

“Wind and solar facilities have a finite life span, and many across the United States are coming to the end of their useful life. Establishing reasonable bonding amounts will help to address challenges as to how to properly decommission a site or handle associated waste,” he saide.

“The amount of the bond shall be reasonably proportionate to the costs related to potential hazardous liabilities, site decommissioning and reclamation, and proper recycling or disposal of the wind and solar facilities.”

There was no explanation of why any energy efficiency product, which could range from an LED light bulb, to a thermostat to thousands of other products, would be covered.

There was no explanation of why any company that produces alternative energy or alternative fuels should be covered, which could include businesses ranging from biofuel distributors and blenders, to compressed natural gas cylinder makers, battery makers and hundreds of component parts.

There was no explanation of why research and development facilities for alternative energy sources or fuels would be covered, which could include dozens of colleges and universities across the state.

There was no explanation of why high-efficiency locomotives were covered, which could significantly impact Erie’s major employer-- Webtec.

The bill was referred to the Senate Environmental Resources and Energy Committee that Sen. Yaw Chairs.

The hearing will start at 9:00 a.m. and will be available live online.

In multiple House and Senate hearings, representatives of the agriculture community have said solar projects-- and wind farms--  are an important element in helping farms survive economically in difficult circumstances, a fact the Pennsylvania Conservative Energy Forum has repeated.  Read more here.

Rare earth minerals are not toxic in products themselves, obviously.  We use iPhones, tablets and other electronic products everyday with these materials in them.  Mining, processing and recycling rare earth minerals can pose risks to workers and the environment.

Interestingly, Penn State and others are actively researching how rare earth minerals can be extracted from coal, which could help revive that industry and help mine reclamation efforts. Read more here.

Sen. Yaw, said, “This is not a new concept as coal, natural gas, solid waste and a host of other industries are required to post financial guarantees for their activities. This requirement would not apply to homes and businesses which host solar facilities that generate electricity for their own use.”

Simply not true.  Coal, natural gas, solid waste and a host of other industries are NOT required to post a bond for things like hazardous liabilities, proper recycling and disposal of their facilities themselves.

Obviously, solar and wind energy facilities do NOT produce air pollution and waste in their operation like coal, natural gas and other industries do.

Second, no other electric generation or industrial-type product has a requirement they be recycled, let alone have a bonding requirement.

Third, if “hazardous liabilities” and “recycling” costs are to be covered for solar, wind and renewable energy facilities, they should also be covered for coal, natural gas, waste and other industrial facilities because they are NOT covered now.

Fourth, a bonding requirement will make what has rapidly become the cheapest form of electricity generation-- renewables, which are now beating out coal and in many places natural gas, more expensive. Read more here.

The hearing will be held in the Senate Chamber starting at 9:00 a.m.  Watch here live.

This legislation is part of a larger effort by conservative Senate and House Republicans to slow or kill renewable energy projects in Pennsylvania.

In addition to this legislation, Republicans have introduced or plan to introduce bills to--

-- Stop state support for solar energy projects with any foreign components, which every energy generation source has.  Read more here.

-- Opposed the Carbon Pollution Reduction Program covering power plants (RGGI) - Senate, House  And threatened to hold up nominations to the Public Utility Commission-- which has nothing to do with the RGGI regulation-- unless the proposal is withdrawn.  Read more here.

-- Senate Republicans Report Out Bill Taking Away DEP Authority To Reduce Carbon Pollution From Any Source, Including Power Plants

--  Senate Republicans Report Out Bills To Kill Regulations By Doing Nothing, Repeal Regs Because They Have Too Many Words, Shield Law Breakers, And More

-- Senate Republicans To Gov. Wolf: We Will Reject Any Nominees To PUC Until You Withdraw Your Executive Order Joining RGGI Carbon Pollution Reduction Program For Power Plants