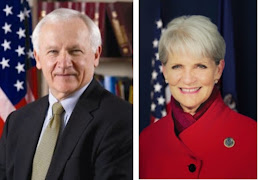 On April 27, the Senate Environmental Resources and Energy Committee reported out Senate Bill 119 (Yaw-R-Lycoming) taking away DEP’s statutory authority to adopt regulations to reduce carbon pollution from any source, including power plants consistent with the Regional Greenhouse Gas Initiative.

Sen. Carolyn Comitta (D-Chester), Minority Chair of the Committee, offered an opening statement of support for the DEP's regulations to reduce carbon pollution from power plants.

Here are their statements.

As I said at our very first meeting, I hope that through our work on this committee we can find common goals and common ground on environmental protection and energy policy.

However, on this issue – Pennsylvania participating in the Regional Greenhouse Gas Initiative – we must agree to disagree.

On the bill currently before the committee, I will be voting no.

The fact is we took up this same bill last session.  Senate Bill 119 contains identical language to House Bill 2025.

As you know, the governor vetoed that bill, saying: “Allowing this legislation to become law would effectively deny that climate change is an urgent problem that demands prudent solutions.”

I respectfully suggest that we use our time in this chamber in a more productive, collaborative, and bipartisan manner.

Why? Because with each passing day the impacts of climate change grow more significant and the need to act more urgent.

-- The U.S. Chamber of Commerce also supports a “market-based approach to climate change to accelerate reductions in greenhouse gas emissions across the U.S. economy.”

-- And just last week, the United Mine Workers announced that they would accept President Biden’s plan to move away from coal and other fossil fuels in exchange for a “true energy transition” that includes thousands of jobs in renewable energy and spending on technology to make coal cleaner.

Our Constituents Know It:

-- Of the nearly 500 speakers at ten public Environmental Quality Board public hearings in December, more than 95 percent supported Pennsylvania joining RGGI (according to the Clean Power Coalition).

-- And more than 70 percent of Pennsylvania voters are concerned about the future negative impacts of climate change on their children and grandchildren, and want state government to financially support communities that may be impacted by the transition to cleaner energy sources (Clean Jobs for Pennsylvania Coalition and PennFuture).

Our Neighboring States Know It:

Those participating in RGGI are realizing:

-- More Jobs - RGGI has created 45,000 job-years of work across the participating region since the program’s launch (Analysis Group Study, 2018).

-- More Economic Growth – RGGI yielded a net benefit in economic activity of $4.7 billion (Analysis Group Study, 2018) and economic growth in the RGGI states outpaced the rest of the country by more than 30 percent (Acadia Center Report, 2019).

-- And Lower Emissions. Since it took effect in 2009, carbon emissions from power plants in RGGI states have fallen by almost half. This decline is 90% greater than in the rest of the United States (Acadia Center Report, 2019).

We could go on and on with numbers, polling data, and statistics.  But it’s clear that the business community, our own voters, and our neighboring states see the immense benefits of joining RGGI:

-- Billions of dollars in economic growth.

The question is: why can’t we?

Now, I do understand and appreciate the concerns of my colleagues in the majority about jobs in coal.

But coal is already declining.

Since 2005, its share of Pennsylvania’s energy production has dropped from 55 percent to 17 percent.

Coal-fired plants are not closing because of RGGI – but due to competition from natural gas.

Meanwhile, we’re not doing anything to help transition those jobs to clean energy.

We had a very informative hearing on carbon capture technology.

The Biden administration is supporting a $100 million initiative to support job creation and transition in these communities.

Ironically, RGGI is likely one the best avenues available to support investments in and the transition to clean energy jobs.

Yet, here we are today, debating a bill that was already vetoed.

And the clock is ticking.

Not for the sake of our environment.

Not for the sake of our economy.

And not for the sake of our citizens.

Instead, let’s help those workers by creating thousands of new family-sustaining careers in clean energy.

RGGI is the path forward.

It’s not about killing the jobs of today.

RGGI is about creating the careers of tomorrow.
It’s not a tax on electricity bills.

RGGI is a market-based auction system in which power companies purchase allowances based on how much carbon pollution they emit.

It’s not some sort of usurpation of Pennsylvania autonomy or legislative power.

Under RGGI, Pennsylvania will retain its authority and independence to set its carbon cap.

We’ll determine how the funds will be invested here to benefit workers and communities in our clean energy economy.

And the administration and DEP have the authority to move forward on RGGI under the Air Pollution Control Act.

In closing, I am reminded that on May 18, 1971–  Pennsylvania's voters ratified what is now Article I, Section 27 of our state constitution–the Environmental Rights Amendment: “The people have a right to clean air, pure water, and to the preservation of the natural, scenic, historic and esthetic values of the environment.”

50 years later – we have a duty to continue to work to uphold that promise.

I ask for a no vote on this bill not because climate change is on the horizon – because it’s already here.

It is the existential crisis of our time.

And with equal strength and sincerity, I also reemphasize my appeal to work with the majority on solutions to adequately address this crisis for the sake of our environment, our economy, our health, and the future of all Pennsylvanians.

Just a few comments about this bill. I think the RGGI program is, and I've described it this way in the past, it's probably the most superficial attempt at a piece of legislation, that I have ever seen.

And it's a feel good thing.

In the past 10 years in Pennsylvania, our emissions are lower than any of the other RGGI states it's proposed that we join with.

How does that make sense? And in the United States, our emissions have flat-lined for about the past 10 years.

They're the lowest that they've been since the beginning of the Industrial Revolution.

Pennsylvania is an energy exporter. The comment was made, all the RGGI states, they've reduced their emissions. Well, of course they have. We're producing the electricity.

And oh by the way, somebody needs to produce the electricity, unless we're just gonna, I don't know what we're gonna do. We can't have combustion, so we can't have any light at night, I guess.

We can, we can work on drill sites. We can work on homes, like just tighten up the valves, stop leakage. We can help farmers with digestors.

I saw a program that said that there's a company that's gonna stop giving out beef recipes to cut down on the production of beef in the United States. And the reason they're gonna do that is because beef pass too much gas, and that's bad for the environment.

So, we're not gonna use beef recipes anymore.

I mean, when you talk about looking at the big picture, how ludicrous are some of the things that we do?

One of the comments was made about the downward spiral\of the coal industry.

A lot of us heard a presentation a couple weeks ago about where the population growth is gonna be in the next 20 to, or, by 2050, in the next 20 to 30 years. And what is the source of energy?

Population growth is gonna be in the world, it's gonna be in Africa, India, and China. And their primary source of energy is coal.

So, when we say that we're gonna eliminate coal from here in the United States, where we have significant environmental regulations on the way that our coal fired power plants operate, and the use of coal.

I'm sure that these other countries don't have those same regulations.

So, all we're doing, we're hurting ourselves. We're shooting ourselves in the foot. Why? Just because we're not looking at the big picture.

One of the things that, that, comment that I have made and many people have heard me say it before, and I don't care whether it's the President of the United Stated making a pronouncement that we're going to reduce carbon by such-and-such by a certain period of time, or whether it's the governor or whether it's some environmental person.

I have said this repeatedly. You cannot have clean energy or green energy projects without fossil fuels. It is impossible.

And I have said that for at least a year.

Nobody has challenged me. Nobody has come with a project or a program where a clean energy project does not rely on fossil fuel.

And if you want to take it one step further, you cannot have a clean or a green energy project without mining.

So, we need to wake up, look at the big picture, and this bill [Senate Bill 119] gets the legislature involved that represents the people.

And we need to take a look at what we're doing from the 30,000 foot or from the big picture level, and not just say, "Oh, this is a piece of feel good legislation and we're gonna target this one, this one sector, and then we're gonna go away and say we are cleaning up the environment."

That is not the way it works.

On the bill, please call the roll.

Click Here to watch a video of the Committee meeting.

-- Senate Republicans Report Out Bill Taking Away DEP Authority To Reduce Carbon Pollution From Any Source, Including Power Plants

-- Senate Republicans Report Out Bills To Kill Regulations By Doing Nothing, Repeal Regs Because They Have Too Many Words, Shield Law Breakers, And More