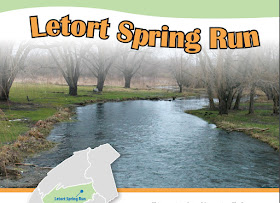 On August 19, the Department of Environmental Protection issued a notice of violation to the Borough of Carlisle in Cumberland County saying contractors working on sewer pipe near Letort Spring Run likely resulted in a discharge of heated water mixed with a Styrene-based resin that discharged upstream from the site of the July 31 fish kill.
DEP explained in the NOV the contractors were performing a “cured-in-place pipe (CIPP) installation” in the Letort Interceptor as part of the Borough’s ongoing rehabilitation project.  As part of the CIPP process, the contractor uses heated water in contact with a Styrene based resin.
The results from samples taken by DEP and listed in the NOV show evidence of Styrene.
DEP also said in the NOV an unpermitted discharge of raw sewage was observed from a portable pump hose flowing on the ground and into the channelized portion of Letort Spring Run used by the same contractors.
The NOV requests the Borough to submit a written report of its own investigation into the incident and the Borough’s role in oversight of the project within 15 days.  The report is to include a proposed timeline for completing the Letort Interceptor project and thermocouple data analysis as a potential cause of the fish kill.
DEP’s investigation of the incident is ongoing.
On August 1, the Fish and Boat Commission reported a fish kill of more than 200 to 250 brown trout in Letort Spring Run.  The site of the fish kill was near the U.S. Army War College.  The Commission’s investigation into this incident is ongoing.
Letort Spring Run is a 9.4-mile-long tributary of Conodoguinet Creek that is famous for its wild brown trout fishing. Its origin is south of Carlisle Borough in South Middletown Township and the Bonnybrook area.
It flows through downtown Carlisle and is on display at the borough’s 12-acre Letort Park where it is contained within stone walls. The section of creek between Pennsylvania Route 34 and it’s outlet at the Conodoguinet Creek is a designated Pennsylvania Scenic River.
Click Here for a copy of the NOV.
Cured-In-Place Process Impacts
Dr. Andrew Whelton, an Associate Professor of Civil, Environmental and Ecological Engineering at Purdue University, and several colleagues have been doing research on the cured-in-place pipe rehabilitation practice (CIPP) that is the subject of the Letort Spring Run fish kill investigation.
"Infrastructure is a big issue nationwide and the completely preventable fish kill shows the direct implications of how repairing infrastructure can sometimes cause environmental degradation," said Dr. Whelton.  "The CIPP practice is used nationwide and we (Purdue researchers) have identified at least 13 chemical contamination incidents, others have included fish kills."
He said there have been at least 14 other water contamination incidents around the U.S. in Georgia, Vermont, Washington, Oregon, California, Minnesota, Alabama, Connecticut, and elsewhere.
"The CIPP process likely can be used without endangering the environment and fisheries if proper controls and monitoring was implemented," said Dr. Whelton. "Municipal engineers generally do not understand the pollution potential of outdoor plastic manufacturing and often contractors who use the technology do not either."
"Styrene is not the only chemical released by this practice. In a recent study we found some non-styrene chemicals were present above water quality standards in New York," said Dr. Whelton. "You have to throw the kitchen sink at a chemical release like this otherwise you risk letting chemicals remain in the environment and go undetected.  Contamination has remained in the environment for 3 months at other release sites.”
He recommends the Fish and Boat Commission consider a ban on eating fish in the affected area until adequate water testing results are obtained.
"We have been working on testing CIPP project sites for the past 3 years for six states-- Virginia, New York, Ohio, North Carolina, Kansas, and California," said Dr Whelton.
"That 3 year project is ending and coming are recommendations on how to prevent chemical releases and fish kills from happening."
Dr. Whelton and the Purdue researchers have gathered the results of their research so far on the CIPP Solutions Group website.  Questions should be directed to Dr. Whelton by sending email to awhelton@purdue.edu or calling 765-494-2160.
Related Article:
Fish & Boat Commission Reports 200+ Fish Kill In Letort Spring Run, Cumberland County
NewsClips: