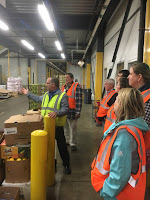 Four Seasons Produce, Inc. in Ephrata, Lancaster County hosted a tour of its distribution center Thursday for local elected officials and business leaders to showcase energy efficiency upgrades and retrofits which have resulted in multiple benefits for the company and the local community.
Four Seasons has capitalized on the Pennsylvania Act 129 energy efficiency programs to save both energy and money, including a twenty-three per cent reduction in electricity costs.
The Keystone Energy Efficiency Alliance (KEEA) participated in the day’s events to highlight the importance of Act 129 policies for businesses such as Four Seasons across the state.
“Act 129 is an example of smart policy that has created local jobs that can’t be outsourced…” said Julian Boggs, Policy Director for the Keystone Energy Efficiency Alliance, a 50-member Pennsylvania trade association.
Act 129 is Pennsylvania’s cornerstone energy efficiency law, enacted by the General Assembly in 2008 with broad, bipartisan support.
The energy efficiency retrofits and upgrades made by Four Seasons throughout its distribution center were possible because Act 129 makes the up-front costs of energy efficiency projects affordable.
All Pennsylvanians benefit from the energy cost-savings enabled by Act 129, from residential customers to large manufacturers.
"At Four Seasons Produce, we have always believed that energy efficiency and sustainability are vital components to our successful business model. It is important that we at Four Seasons invest in technologies that will keep our energy costs low and allow us to be a strong employer in Lancaster County,” said Randy Groff, Director of Facilities and Energy at Four Seasons Produce. “We are grateful that energy efficiency programs like Act 129 exist so that we have the opportunity to invest in these energy projects and then reinvest those savings into our company for the benefit of our employees and our business,"
Four Seasons Produce requires substantial refrigeration controls to ensure the cold chain is maintained for product integrity for their customers throughout the Mid-Atlantic and Northeast markets.
From retrofitting its entire facility with LED lighting to making HVAC system upgrades, participating in demand response programs and improving the facility’s building envelope, Four Seasons has proven to be a local example of how an energy-intensive business operation can still be efficient and reduce operating costs.
In fact, Four Seasons has reduced its electric usage by17 percent, reinvesting those savings into core operations that support local job growth and economic development.
In combination with its energy efficiency programs, Four Seasons has also made a comprehensive commitment to sustainability through water conservation measures, recycling programs, and fleet performance enhancements.
Energy efficiency programs and projects are critical tools used by businesses and consumers to save energy costs, and are also a powerful job creation engine.
According to a recent U.S. Department of Energy report, 62,341 Pennsylvanians are employed within the energy efficiency industry- a significant increase in recent years, spurred by Act 129.
The Four Seasons tour was attended by: Sen. Scott Martin (R-Lancaster), Representatives  David Zimmerman (R-Lancaster) and Keith Greiner (R-Lancaster) as well as staff from the offices Representatives Mindy Fee (R-Lancaster) and David Hickernell (R-Lancaster).
For more information on the Act 129 Energy Efficiency Program, visit Keystone Energy Efficiency Alliance’s Act 129 webpage or the Public Utility Commission’s Act 129 webpage.
Related Stories:
KEEA Energy Education Fund Recognizes Schools Saving 2.9 Million Kwh Of Electricity
Pocono Environmental Education Center Joins KEEA To Tout Benefits Of Energy Efficiency
PUC Highlights PA One Call Changes, Drilling Impact Fee Appeal, Act 129 Energy Efficiency Savings, Growth Of Natural Gas
David E. Hess at 11:50 AM
Share