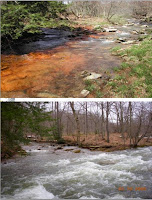 Pennsylvania's Dents Run abandoned mine reclamation project in Elk County was recognized this week as one of five winners of the 2012 federal Office of Surface Mining Mine Reclamation Awards.
The Dents Run project, which originally started in 1996 and was completed in 2010 at a cost of $14.2 million, is part of the Bennett Branch Watershed which was devastated by abandoned mine discharges and unreclaimed strip mines.
Photo: Procupine Run confluence with Dents Run before, after.
A copy of the original nomination form, with before and after photos, is available online.
The project restored and revegetated 320 acres of abandoned mine lands, which will now serve as crucial habitat for the state’s wild elk herd, which roam the adjacent Elk State Forest. In addition, the reclamation restored waterways in the area by neutralizing acid mine water, marking the first time in more than a century the streams can support aquatic life. Waterways north of the impacted streams are stocked with trout.
“This award rightly recognizes that a key part of Pennsylvania’s ecosystem has been restored, and, by extension, a key part of the state’s tourism industry,” DEP Secretary Mike Krancer said. “Trout fishing and sightseeing for the elk herd have a bright future as a direct result of this project, which could not have happened without the many partners we worked with.”
DEP’s Bureau of Abandoned Mine Reclamation paired with the Bennett Branch Watershed Association, the Game Commission, the U.S. Army Corps of Engineers, the federal Office of Surface Mining, the Department of Conservation and Natural Resources, the Elk County Conservation District, the Rocky Mountain Elk Foundation, the Elk County Commissioners, and local mining companies P&N Coal Company and Original Fuels.
More than half a million tons of limestone were mined at the site and used to neutralize the thousands of gallons of acidic mine water that was flowing through the site from 14 different discharge points. This represents the largest use of alkaline materials to neutralize acid mine drainage in the history of the state.
More than five thousand cubic yards of waste coal were removed from the site and used as fuel at a coal-fired power plant, providing electricity to homes and businesses.
DEP also closed or remediated 23 mine openings and regraded 10 dangerously steep highwalls that totaled 30,850 feet. The cost of the project was paid out of state and federal abandoned mine land funds, which are supported by fees paid by the active mining industry, as well as funding from the Army Corps of Engineers and contributions from P&N Coal Co. DEP also worked with contractors Stream Restoration, Inc. of Pittsburgh and Berner Construction Inc., of Lancaster.
Mining began at the site in the late 1800’s and continued through the 1960’s, when the site was abandoned, leaving devastating environmental degradation.
The project won the federal award, beating out entries from Arkansas, Illinois, Indiana, Kentucky, Maryland, Montana, New Mexico, Ohio, Virginia, West Virginia and Utah. This is the second straight year a DEP mine reclamation project has won the national award.
Last year, a reclamation project in Newport Township, Luzerne County won. DEP worked to reclaim 36 acres of abandoned mine lands at the Newport North site. DEP also regraded more 3,150 of dangerous highwalls that were up to six stories in height. Most importantly, the reclamation filled in a hazardous water-filled pit that stood at the foot of one of the now-regraded highwalls that had claimed the lives of six people over the years who had been off-roading at the site in 4x4 vehicles.
For more information, visit DEP’s Abandoned Mine Reclamation webpage.
NewsClip: New Federal Law May Cost PA Mine Reclamation Program $200M
David E. Hess at 9:38 PM
Share
‹
›
Home
View web version