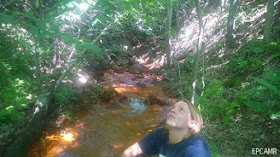 The Susquehanna River Basin Commission is partnering with the Eastern PA Coalition for Abandoned Mine Reclamation, American Energy Solutions, and the Department of Conservation and Natural Resources to investigate the Mocanaqua Tunnel Mine Pools in Luzerne County for consumptive use make-up water for water users in the river basin.
Consumptive use (CU) is water withdrawn and used in such a way that it is not returned undiminished in quantity. Examples include power plant cooling, public water supply diversions, hydraulic fracturing for natural gas extraction, and golf course irrigation.
The Susquehanna River Basin Commission regulates CU that is 20,000 gallons per day (gpd) or more. Regulated projects are required to mitigate their CU. This is to avoid impacts during drought conditions.
Mitigation can be provided by various methods including using water storage, releasing water to offset CU, and discontinuing CU.
Projects that cannot supply their own mitigation can provide monetary payment to the Commission to acquire mitigation on their behalf. These payments go into a fund used to develop water storage, flow augmentation, water conservation, and environmental improvement projects.
This includes evaluation of flooded underground mine pools for potential water storage and mine discharges for potential water quality treatment. Additional details can be found in the Commission’s recently adopted Consumptive Use Mitigation Policy.
Mocanaqua is located in Conyngham Township, Luzerne County, Pennsylvania. The first reported anthracite coal mining in the area occurred in 1836. The majority of underground mining was completed between 1865 and 1872, after which various labor strikes caused shutdowns.
Limited underground mining continued until the 1920s, and strip mining was later used to extract the remaining surface coal. By the 1950s, the coal operations had become financially noncompetitive, and mining ceased.
During underground mining, water that infiltrated from the surface would fill the newly-mined areas below ground. The miners constructed a series of tunnels to drain the mines and discharge the water to the Susquehanna River, which created the Mocanaqua Tunnel discharge.
Historic mine maps show the complex underground mine workings. After underground mining in the region ceased, the mine workings flooded, creating mine pools that often contain significant volumes of water storage.
The Mocanaqua Tunnel mine is believed to be a significant mine pool of isolated mine water. The mine pool size is thought to exceed 500 billion gallons of water.
The Mocanaqua Tunnel is the last major Northern Field discharge to impact the Susquehanna River.  The tunnel drains the West End Basin Mine Pool and is the seventh highest acidity loading producer in the Susquehanna River Basin Anthracite Fields.
The Commission’s Anthracite Region Mine Drainage Remediation Strategy contains a recommendation to complete a study focused on the CU mitigation potential of the West End Mine Pool (Mocanaqua Tunnel).
In 2016, the Commission partnered with the Eastern PA Coalition for Abandoned Mine Reclamation (EPCAMR), American Energy Solutions (AES), and the Department of Conservation and Natural Resources to conduct a Mocanaqua Tunnel Mine Pool CU Mitigation Feasibility Study.
DCNR granted a research agreement to EPCAMR and the Commission to allow various field investigations to be conducted, which included drilling groundwater monitoring wells, conducting a dye tracer study, and collecting water quality samples.
EPCAMR provided expertise in acquiring and digitizing historic mine maps, preparing detailed mine pool mapping, and developing a three-dimensional (3-D) mine pool model for estimating water storage volumes.
The digitized mine pools are overlaid on recent aerial photography overlooking the town of Mocanaqua.
Based on the mine pool model and field investigations, the Priscilla Lee Basin was determined to have the greatest potential for CU mitigation water storage. The 3-D model shows the distinct mine pools and drainage tunnels.
The other mine pools were found to drain directly to Mocanaqua Tunnel, which would require continuous mine drainage treatment to be used for CU mitigation and would be cost-prohibitive.
The Priscilla Lee Basin, however, was determined to not have a direct connection to the tunnel and represents a more isolated source of water storage.
The 3-D mine pool model created by EPCAMR showed that this mine pool could provide over 100 million gallons of water storage to help offset CU in the basin during low flow periods and droughts.
There is additional work needed to determine the most cost-effective mine drainage treatment approach and if the amount of water storage available is economically feasible to develop.
This project, if successful, may lead to the supply of millions of gallons of treated mine influenced water during low flow conditions into the local watershed that feeds the Susquehanna River.
The Commission is committed to continue investigating opportunities to re-purpose flooded mine pools as water storage assets for CU mitigation, as well as addressing legacy coal mining impacts by restoring abandoned mine lands and discharges throughout the Susquehanna River Basin.
For more information on programs, training opportunities and upcoming events, visit the Susquehanna River Basin Commission website.  Click Here to sign up for SRBC’s newsletter.   Follow SRBC on Twitter, visit them on YouTube.
(Photo: Mocanaqua Mine discharge, courtesy of EPCAMR.)

(Reprinted, for the most part, from the SRBC Summer 2020 Guardian newsletter.)