John Arway, Executive Director Of The Fish & Boat Commission, To Retire In November 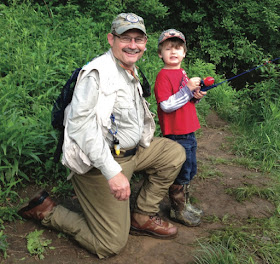 Fish and Boat Commission Executive Director John Arway Tuesday announced he will be retiring on November 2 after 38 years of service to the Commission.
He made the announcement in a statement to members of the Commission Board and PFBC staff.  It said, in part--
Retired friends have told me that you will know when the time has come to retire.  I now understand. I have advised Board leadership that I will be retiring from the position of Executive Director of the PA Fish and Boat Commission effective 02 November 2018.
I would like to take this opportunity to inform the Board of Commissioners, Boating Advisory Board members and fellow PFBC staff of my planned retirement.
Today’s announcement should provide the Board sufficient time to conduct the necessary search for qualified individuals and appoint someone before my departure.
I have advised President Hussar that I will do everything I can to make the transition to a new Director as simple as possible.
I have been with the agency for over 38 years, during which time I have had many motivating and rewarding experiences.
Working for the PFBC has been a privilege, nothing less.
Never did I think, back in the fall of 1979 when I stopped by the PFBC’s Pleasant Gap Office and visited with Jack Miller and Ronni Tibbott to discuss a possible semi-skilled laborer position working on fish habitat projects, that I would wake up 38 years later as the retiring Executive Director of an agency I always respected and admired.
I would like to thank all of the people both inside and outside the agency for their support and assistance over the years. I have worked with the best of the best.
I feel truly blessed to have been able to serve by your sides while we worked to protect, conserve and enhance our Commonwealth’s aquatic resources and provide Commonwealth anglers and boaters with first class fishing and boating opportunities.
Our list of accomplishments is long and will remembered in the next history book as our legacy in the proud tradition of the second oldest fish or wildlife agency in the nation.  Bravo Zulu!
When Commission President Tom Shetterly called and offered me the job as Executive Director over eight years ago, the vision I had of the position was soon replaced by the reality of the unusual blend of politics, science, state and national public policy, economics, and social media and personal interactions with anglers and boaters all across the Commonwealth.
My only regret is that I failed to achieve a sustainable future for the agency and its programs.
The plan we created eight years ago put us on course to control our own destiny.  We executed painful cuts across programs to be able to the pay rising expenses of government.  We saved sufficient revenues to be able to sustain operations until others provide funding to satisfy the public service demands of a government business.
I leave the agency in good hands and am confident that the Board and PFBC staff will maintain the courage and resolve to continue to do the right things for the right reasons for not only the current generation of PA anglers and boaters but more importantly for generations yet to come.
The plan for the future should include the defense of agency independence, living within our means and not spending more than we earn.  This simple formula will insure continued agency success far into the future.
I know that my leaving will present challenges for a new director but will also create opportunities.
I am preparing plans for my replacement that outline in detail each step that is needed to complete the tasks at hand.
I will also be available to assist my replacement in an orderly transition in any way that I can.
During my retirement, I will be enjoying the bounties provided by Penn’s waters and woods.  I may even stray outside our state border from time to time to see if the grass is really greener in other places.
I will remain available for advice, counsel or friendly discussion in case there is anything I can do to assist you or the agency.
I’ll be spending more time in a town called Lynch in the middle of the Allegheny National Forest.
It’s the camp with the green metal roof and I’ll be the one sitting by the campfire surrounded by an army of grandkids roasting marshmallows and identifying constellations in the night sky.
To fulfill a life’s dream and begin a new journey spending time with family and friends, I am truly grateful.
Thank you all very much for the wonderful memories. I look forward to following the continued successes of this great agency.
It has been a true privilege and honor to end my professional career as the Executive Director of the Pennsylvania Fish and Boat Commission.  Carpe diem!
Your Director,
John
Do Your Duty And Fear No One... R.W. Abele
Reaction
Former DEP Secretary David Hess congratulated Mr. Arway on his leadership and tenure at the Fish and Boat Commission, saying, “John Arway has been and will no doubt continue to be a forceful advocate for aquatic resources in the Commonwealth.  He follows in the footsteps of Pennsylvania’s first environmentalists-- our anglers and hunters-- and very much in the mould of his mentor Ralph W. Abele.  He will be missed at his post, but not forgotten.  Our streams, rivers and watersheds were made better by his work.”

Take Action:
How Good Is The Water Quality In Streams In Your Community?  Take A Look, Then Act
David E. Hess at 12:54 PM
Share